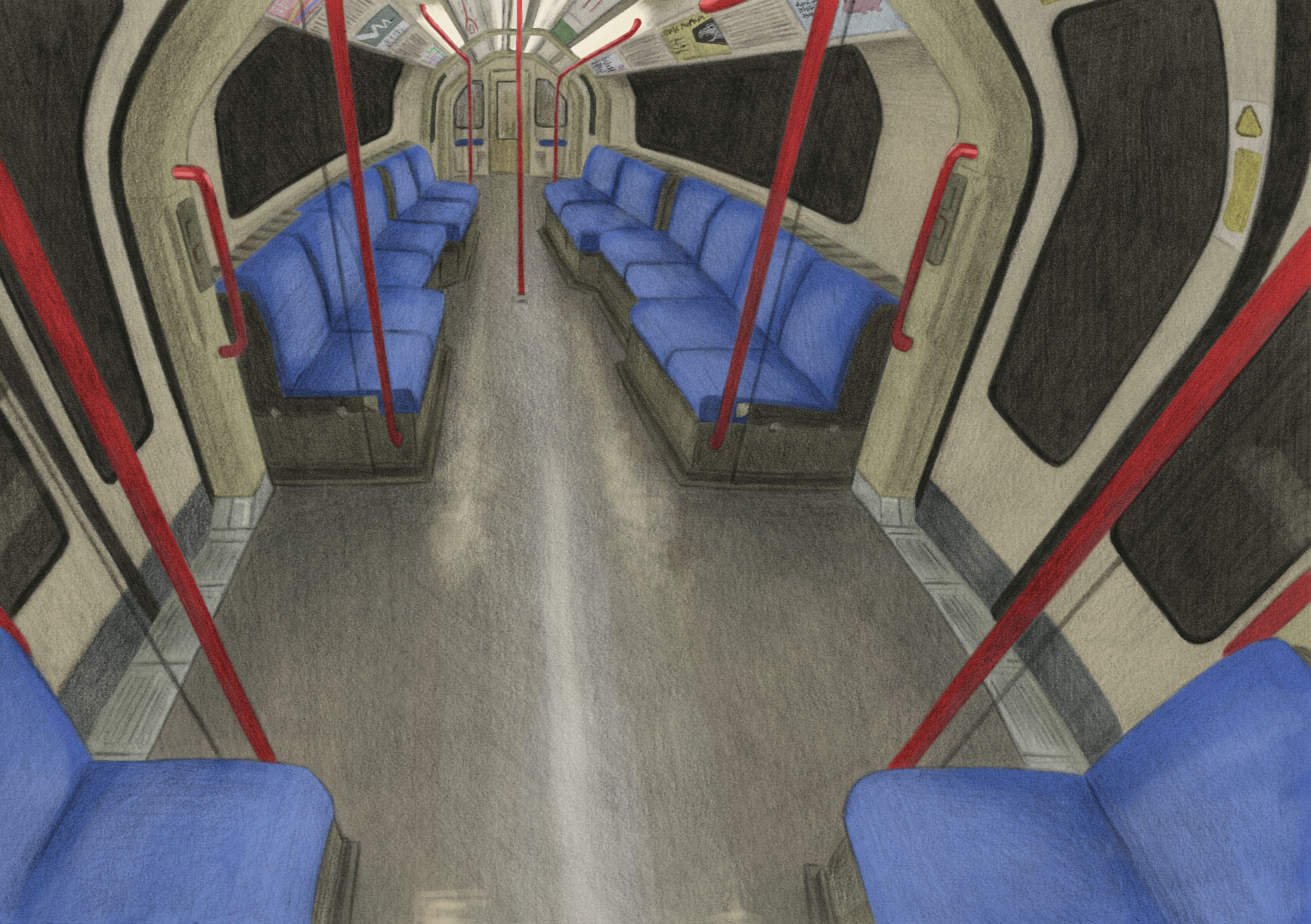 Before the Covid-19 pandemic the London Underground was typically characterised by its crowded and confined spaces, being densely populated during busy periods. Despite this, travelling on the Tube can often be a solitary and isolated experience. There is minimal interaction between the passengers, and unspoken social norms and customs are seemingly automatically adhered to. The change in circumstances due to the pandemic has led to these normally busy and crowded spaces becoming emptier and more vacant, bringing about a drastic change in character, and potentially allowing us to reflect on the accepted and established ways in which we behaved and navigated in these urban or subterranean spaces before. A parallel can be drawn between the potentially isolating and solitary nature of travelling on the Underground despite being surrounded by people in a pre-pandemic world, with the isolation and loneliness potentially brought on by lockdown restrictions and social distancing.

This was a topic I explored during the final year of my MA, studying Visual Communication: Illustration at the Royal College of Art, which, due to constant pandemic restrictions and lockdowns, has mainly been spent at home. The project was informed by material including academic writings about the Tube, as well as accounts from Transport for London workers. The research for the project initially looked at different aspects of the London Underground, before it eventually focused on the core themes of isolation, routine, and transience, as well as considering these themes in relation to the Covid-19 pandemic. An outcome for this project culminated in the form of a short, animated film, depicting the same journey on the Central Line from Stratford to White City several times throughout the course of the pandemic, documenting the changes in circumstances that began in 2020.

The film can be viewed at: https://www.youtube.com/watch?v=3x9Zvzh-BDg&t=80s

The project is also a part of the 2021 Royal College of Art Online Degree Show: https://2021.rca.ac.uk/students/jacob-courtney

The film juxtaposes scenes of crowded Tube carriages from before the pandemic, with emptier, quieter ones during it. Repetition is used as a means to explore time – both before and during the pandemic, highlighting the relative isolation of each. The short film constitutes hand-drawn images which are then coloured digitally. Animation and moving image are selected as appropriate methods to explore and communicate the transitory nature and constant movement of the London Underground. The repetition involved in the creation of a hand-drawn animation, as well as the use of repeated scenes in the film, also relates to the routine and repetition of everyday life, much intensified during the pandemic.

The effects of the pandemic have seen more people working from home and travelling less. Measures were put in place such as making face coverings mandatory when using the Tube, and putting up signs advising people to keep their distance between others.

Talking with Transport for London workers during the project helped inform me of the challenges being faced by the network during the pandemic, such as TfL struggling with running costs due to most of its income being made up of fare revenue, of which there had been a lot less of. There were questions over whether the way people work would change and what the wider consequences of this would be. For example if more people work from home it could potentially affect other businesses which earn income from workers who commute into the city. Thoughts were raised over what the future of Underground travel would be like and whether a different approach was needed.

Even though a lot of these points were not directly referenced in the main outcome for this project, the work aimed to speak to this uncertainty of the future. Featured near the end of the film in a text intertitle is the etymology of the word commute, a word which originally meant ‘to change’ before later meaning ‘going back and forth to work’. Inclusion of this information was intended as a way to subtly put forward the question of whether things will change significantly as a result of the pandemic, or go back to something resembling the way things were before, or to ‘go back and forth’.

The film acts as a response to the surreal events which began last year and continue to occur, whilst also suggesting that the isolation and loneliness brought on by the pandemic is not dissimilar to the potentially isolating nature of navigating these urban and subterranean spaces in a pre-pandemic world. Responding to the drastic changes in everyday life that occurred due to the pandemic, and seeing how they have affected the character of these everyday environments, allows us to reflect on and question the accepted and established social norms of everyday routines as they were before. 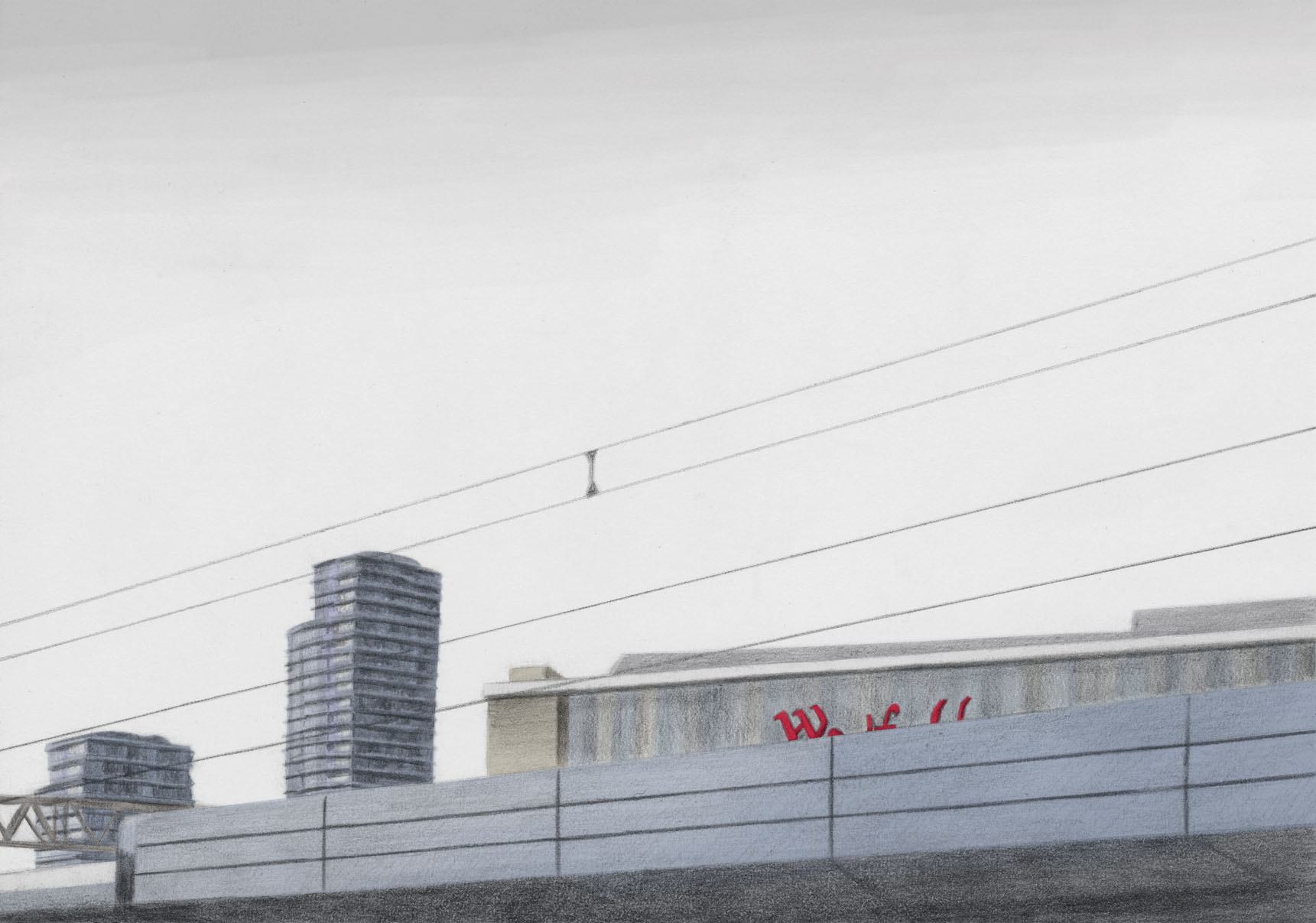